UPDATE: There are still 2 free prints of my Troll Witch piece looking for a home. Check out the details here.

I'm considering altering the layout template I use on this blog soon. I really like the way this one looks, with its snippets of text and the image from each post, but I would like a locked down sidebar for all of the information I have on those floating tabs to the right. It seems as though this template, and specifically those floating tabs, is a bit twitchy. Sometimes the tabs are there, often they are not.
So I'm going to see what else will look good and work better.

On Faerie - Part 3
I'm going to talk about some of the things about Faerie, or our view of it, that I disagree with.
First and foremost is the Christian meddling with Faerie.
There has long been a tradition of religious types imposing their belief system onto Faerie, none more so than Christians. The Christian explanation for Faerie is that the faerie folk are beings (often angels) that were cast out of heaven with Satan, but weren't 'bad' enough to go all of the way to hell. So they ended up here and in Faerie. Obviously, this is hardly the first time that Christianity has bent existing beliefs to their own fold, nor will it be the last, I'd wager. But to say that Faeries, who in many people's minds are entities set apart from us, are creations of the Christian god is taking it a bit far. There has been reference to the Faerie world for considerably longer than that religion has been around, and to just lump it in with Christian mythology (because that's all it is!) is not only short-changing Faerie, but I consider it a great injustice. It goes so far as to state that Faerie inhabitants are petrified of the word 'god' and other religious terms, and they won't walk on consecrated ground. Pish posh, all of it!

Another element of Faerie that I don't care for is the belief that some Faerie dwellers can be 'bound' by certain objects, often iron. I don't think this is the case. The fact that there are great metalworkers like Dwarves in their midst suggests to me that they are familiar with metals and use them in many ways. So why would they be afraid of one of the most common metals? That makes no sense to me.
Faerie seems to be awash with magic, it seems to permeate all things and imbue its inhabitants with a natural magic. The idea that humans can magically bind them when we have no magical skill is, again, illogical to me.

Finally, there's the way that we Faerie enthusiasts are viewed by others. I've gotten some truly odd looks when I've mentioned my interest in Faerie. This goes back to the modern idea that Faerie is a creature like Tinkerbell or the ghastly Cicely Mary Barker Flower Fairies. Yuck.
Most folks don't realise just how far away from the good stuff those fluttering little things are. The stories I read (and write) involve all sorts of creatures, from flesh ripping swamp beasts, dangerous and beautiful beings that will lure you away never to be seen again, great hulking behemoths that will crush your world flat and not even notice. Where a walk in the woods is about the stupidest thing you can do, and mystery and wonder are always tempered with fear and loss.
So now, when somebody asks me what I'm interested in, I normally say something like Nature or Fantasy Art. It saves the trouble of explaining what Faerie really is. And there's less odd faces...

I'll be writing more On Faerie articles soon, but I'm going to mix it up with other stuff, perhaps a look at another artist tomorrow. 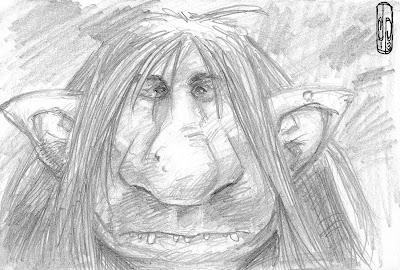 Today's Galway Pub Scrawl 31 Day Drawing Challenge is Apes. I took some chunky liberty with that subject and drew a female Neandertroll. There's a link there, I promise.

Me Fact #54
Following on from yesterday's fact, I'm also for same sex marriage. People's sexual orientation is no business of mine, and I shouldn't have a say in whether they can get married or not. It doesn't affect my life, and even if it did, I can't see how that would be in a negative way. I think gay couples should have all of the rights a heterosexual couple has. Anybody that says otherwise is wrong. Prejudice is a powerful thing, it clouds the mind and makes logic harder to see.
Posted by Jay Penn at 11:49 AM

Jay Penn
Galway, Ireland
I'm a faerie and fantasy illustrator. I work with paints, pens and clay. I write and illustrate my own comics, short stories and children's books. These stories take place in the Realms of Faerie, my land of wonder, magic and adventure!

Tales From Outside The Circle Stories

Alanna: The Wilds Will Bide
Dryad: A Dream of Awakening
Strongbow: The Willing Fool
Longbeard: The Tale of Twig the Terrible